If we fail here death will be a blessing. for Aiur!
Ramblings of
Alex Lovett


I've been real busy the past month or so with a Flash based Kiosk.

The design was done by someone else, provided as layered psd's. My job was to put them into Flash and make them.. well make them do stuff. To populate the design with data from XML files and make it interactive and work. All the usual stuff was involved, Parsing XML, Printing, Shopping Carts, Loading and playing Video and lots of dynamic loading of images and data.

Not much point in me showing it you as all my work was the interactive side of it...

well I guess I can link you to a fully working copy. As of writing It's not designed for use on the web so may be slow and or die if you go to fast for it (before It's finished loading)

It's all copyright someone or other, and is the work of many separate people. And yes It's all in French!

Also I did not design how it works, some bits I had a bit of input on, but it has many faults/weird things about it, strange assumptions and general stupidity which I can't be held responsible for!

It normally has a woman speak on every page, via a alpha masked video overlay, I have removed this as it annoys the crap out of me.

Also of note, I had nothing to do with the code that applies paint/wallpapers to the Room Scene. That was someone else, I just had to communicate with that.

And if you click the Logo in the top left on the decorating/room scene page:

You get to a admin type mode where you can freely and more conveniently decorate things.

Got myself an iPhone tadda!

And naturally It's all hacked now running custom business

Written myself some custom App to push and pull Photos from the iPhone wirelessly, which is magical to behold

Now if only I could do the same with the Calendar

I'm too cool for school now as I installed Apache HTTP/PHP server on my iPhone:

It's useful because you can connect to yourself in the browser and open files like PDF's and Movies stored on the iPhone hard drive. 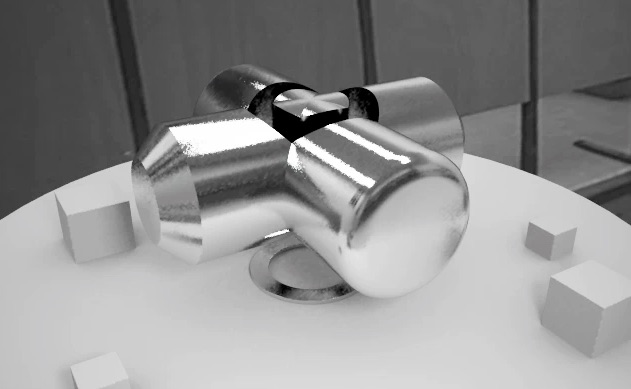 This render has no GI, It's just 2 Area lights, one of which is a dome giving it a GI like feel.

Couldn't get it to work at first, just rendered lots of black frames very quick, I fixed in in the end, I think it was a license issue as I hadn't entered in all the serial numbers under personalize cinema.

The diffusion on the metal is very course due to the anti-alias settings I used and cus I don't know what I\'m doing. Trying to smooth it more seemed to make the render take far too long for my taste, and It's only a test after all.

A philosophy professor stood before his class and had some items in front of him. When the class began, wordlessly he picked up a very large and empty mayonnaise jar and proceeded to fill it with rocks, rocks about 2" in diameter.

He then asked the students if the jar was full? They agreed that it was.
So the professor then picked up a box of pebbles and poured them into the jar.

He shook the jar lightly. The pebbles, of course, rolled into the open areas between the rocks.

He then asked the students again if the jar was full. They agreed it was.
The professor picked up a box of sand and poured it into the jar. Of course, the sand filled up everything else.

He then asked once more if the jar was full. The students responded with an unanimous --yes.

The professor then produced two cans of beer from under the table and proceeded to pour their entire contents into the jar -- effectively filling the empty space between the sand. The students laughed.

"Now," said the professor, as the laughter subsided, "I want you to recognize that this jar represents your life. The rocks are the important things - your family, your partner, your health, your children - things that if everything else was lost and only they remained, your life would still be full. The pebbles are the other things that matter like your job, your house, your car. The sand is everything else. The small stuff."

"If you put the sand into the jar first," he continued "there is no room for the pebbles or the rocks. The same goes for your life. If you spend all your time and energy on the small stuff, you will never have room for the things that are important to you."

"Pay attention to the things that are critical to your happiness. Play with your children. Take time to get medical checkups. Take your partner out dancing. There will always be time to go to work, clean the house, give a dinner party and fix the disposal."

"Take care of the rocks first -- the things that really matter. Set your priorities. The rest is just sand."

One of the students raised her hand and inquired what the beer represented. The professor smiled. "I'm glad you asked. It just goes to show you that no matter how full your life may seem, there's always room for a couple of beers."


My first Vray render with Depth of Field + Lens Distortion
I rather screwed up the glass ball, looks more like a bubble

Adding DOF slowed it down a ton, fortunately you can bake out the GI and play with the DOF separately.

+ Caustics... looks messed up.. hmm what have I done wrong

Vray seems to have some weird bug where it gets stuck sometimes on the initial light cache and never finishes, just eats up all the ram. Very annoying.

I've swapped the ball for uhm.. a glass turd (A cone with a twirl deformer)
These renders all on the medium preset, so a bit course but they are rendering in like 10 minutes so can't complain.

And from another angle:

Show comments for 'Me Like Vray'
You have reached the end of this page - But there's more! Click Older for more
OlderNewer Current
Subscribe to my News Feed.. or screw you then!

To live is to change, and to be perfect is to have changed often
Copyright © 2006 - 2022 - Alex Lovett
Site and content designed, built and massaged by
Alex Lovett
( HD6 / HeliosDoubleSix )
contact me by email: